When you’re (still) running Windows 2008 R2 and are using VMware Tools 10.2.0 you might run in an issue regarding to network loss. VMware has published KB54459.

VMware has fixed the issue with the release of VMware Tools 10.2.5.

Ports are exhausted on a guest VM after using VMware Tools 10.2.0

This issue is resolved in this release.

But how do you know if you’re running this buggy combo? Well PowerCLI to rescue. The script below gathers all the VMs running Windows 2008 R2 and VMware Tools 10.2.0:

Copy the script and change the <vCenterName>. The script will gather all the VMs via Get-View with the Name, Config and Guest properties only. So it’s lightning fast. Once the script has all the information the filtering will take place.  The variable $AllAffectedVms contains all the VMs with Windows 2008R2 as GuestOS and with tools version 10304. Take a look at https://packages.vmware.com/tools/versions to correlate all the different version/build numbers.

The fix is easy. Just upgrade the VMware Tools on the affected VMs.

In this post I’ll show you three PowerCLI one-liners to perform some operations with VMware Tools.

The first one-liner will return all Powered on VM’s with Windows selected as guest OS and perform a VMware Tools upgrade without a reboot at the end.

Sometimes if you want to perform a vMotion or when you try set a host in maintenance mode, the VM won’t vMotion away from the host. Most of the time this is caused by a mounted ISO from a locale datastore. In my environment this is not possible because I use a shared storage datastore to storage all the ISO files. But there is one ISO that’s mounted from a locale datastore, this is the VMware Tools ISO.  Sometimes the ISO isn’t automatically dismounted from the VM. This one-liner creates a list of VM’s where the VMware Tools ISO is mounted:

The last one-liner will dismount the VMware Tools if necessary:

I think there will be a lot more possibilities to script with PowerCLI and VMware Tools. So if you have a question or an idea, please leave a comment below.

I wanted to migrate the lab to Windows Server 2008 R2 and found some problems with the video drivers provided with vSphere 4.0. After a quick search at http://kb.vmware.com I found the following KB article: KB1011709. This article mentioned the new WDDM driver:

This issue can occur due to the XPDM (SVGA) driver provided with VMware Tools. This is a legacy Windows driver and is not supported on Windows 7 and Windows 2008 R2 guest operating systems.

To resolve this issue, update to ESX 4.0 Update 1. A new WDDM driver is installed with the updated VMware Tools and is compatible with Windows 7 and Windows 2008 R2.

Note: After a VMware Tools upgrade, the driver files are located in C:\Program Files\Common Files\VMware\Drivers\wddm_video.

END_OF_DOCUMENT_TOKEN_TO_BE_REPLACED

Recently I had some issues with Linux VM’s which became read-only. In my earlier post about disk-timeout settings I wrote about the timeout value being increased during the VMware Tools installation. But how does the VMware Tools install change this value. I though the solution can be found within the vmware-config-tools.pl script. So to find the vmware-config-tools.pl script just run:

No run the less commmand:

press / and type 180 now you see the info we are looking for: 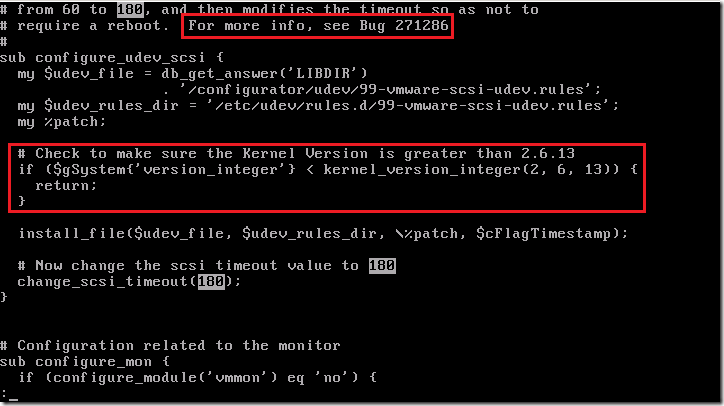 The disk timeout value can only be changed with Linux kernel 2.6.13 or higher. Ok so what if you use a Linux distribution with a kernel older than 2.6.13? From KB51306:

The same behavior is expected even on a native Linux environment, where the time required for the file system to become read-only depends on the number of paths available to a particular target, the multi-path software installed on the operating system, and whether the failing I/O was to an EXT3 Journal. However, the problem is aggravated in an ESX Server environment because ESX Server manages multiple paths to the storage target and provides a single path to the guest operating system, which effectively reduces the number of retries done by the guest operating system.

These guest operating systems are affected:

This situation can lead to serious issues and can only be solved with a reboot of the VM. But there is a workaround. From KB1009465:

The timeout value for a Linux block device can be set using sysfs.
Note: This is usually increased automatically when deploying VMware-Tools, but if it is not installed, you will need increase it manually.

Increase the timeout value for an individual disk using the following command. For example to change the values for device sdc, run:

Run the following command to change the timeout values for all devices to 180:

you can add the following command:

to the /etc/rc.d/rc.local file to make sure the disk timeout is changed during startup.

Ever seen the VMwareService.exe or vmware-guestd process taking all your memory? Well I did see this issue on a few VM’s. Like this VM with Windows Server 2003 SP2 R2:

The VMwareService,exe took 1,3GB of RAM. Ok this is a problem but what started this memory “leaking”.

END_OF_DOCUMENT_TOKEN_TO_BE_REPLACED

After upgrading a large group Virtual Machines  to the latest build of VMware Tools. I got an error when I started a vMotion task on a some VMs.

The warning is pretty clear but I couldn’t cancel the VMware Tools wizard from the vSphere client. After a short search on Google I found a post from Bob Plankers

The solution is quite simple. Logon to the ESX host where the VM is running on and run the following command:

Now you get a list of all the registered VMs on that host. Copy the full path of the vmx from the VM you want to migrate with vMotion. Now run the vmware-cmd pathtovmx getid command:

The latest step is to run the following command. Just replace the idnumber with number you get with the previous command:

Now you are able to migrate the VM with vMotion again.

Today a ran into an issue with the VMware Tools installer on Linux:

The solution was simple this time. Just remove the locations file from from /etc/vmware-tools. You can do this by running the following command:

On a new Windows Server 2003 server without the VMware Tools installed, there are no TimeOut settings configured.

You can find this setting in the following registry key:

The picture below, you’ll see the default settings from Microsoft:

After the installation of the VMware Tools, a new dword value called TimeoutValue is added with the hexadecimal value of 3c. This value represents a timeout of 60 seconds.

On a Linux VM the default timeout is 60 seconds (on a CentOS setup). You can find the timeout settings in:

After the installation of the VMware Tools, the timeout value is changed to 180 seconds.

More info about this subject can be found here:

The first step after a fresh install of a CentOS 5.3 server is too install the packages gcc and kernel-devel. When these packages are installed, update them and reboot of the VM:

Now we have to create a new folder so we can mount the VMware Tools cd-rom.

Start the VMware Tools Installer via the GUI:

create a folder and copy the tar.gz file from the cd-rom to the folder:

Open the folder and extract the tar.gz file:

Open the vmware-tools-distrib folder and start the installer:

You can change the vnic to vmxnet via the following commands:

The final step is to reboot the VM.

Disclaimer: use this script at your own risk 😉

Note: This script will upgrade the VMware Tools if necessary and will shutdown the VM!!!!!

You can download the script here: upgrade-vhardware_vm and here: http://poshcode.org/1217

The script will perform the following actions:

During the process of the script, the VM will be unavailable for 5 minutes or less. So be sure that nobody uses the VM.

The script in action: 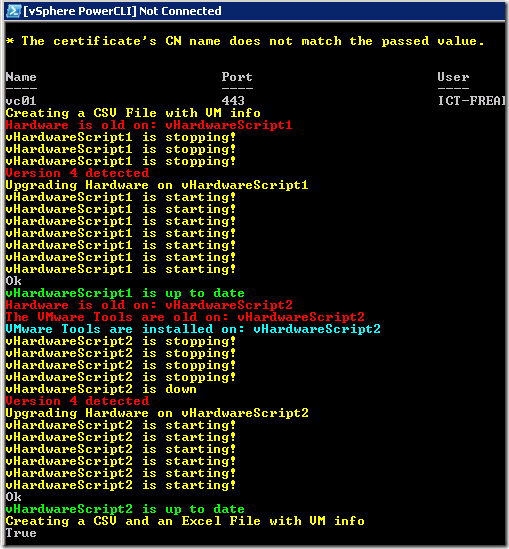 The last step, the creation of an Excel sheet with an overview of the VM’s. Here you can see if the IP Address is changed or not. 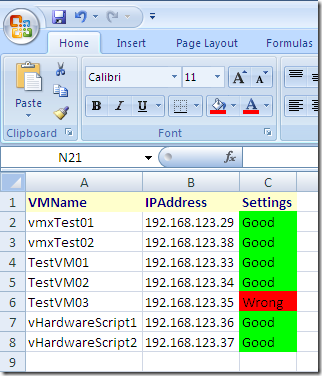 1,396,210 spam blocked by Akismet
ICT-Freak.nl
Create a free website or blog at WordPress.com.